She arrives just in time to save me from a ferocious wild dog on my lone trek and seeing I am shaken, she offers me tea.
I accept and she leads me through a low labyrinth of trees, working their way to her house. She steps in and commands her husband seated quietly in a corner,
“Go Make her some tea!”
He looks reluctant and his reluctance arrives in heap fulls of sugar in my syrupy black tea.
I realise the only word we have in common is “chai” (tea) and we don’t speak the same language.
She asks about my life or I think this is what she asks me and I tell her for ten or fifteen long minutes.
She nods patiently, endearingly and at the end of it laughs uproariously and says she hasn’t understood a word.
I catch one word “thumbi” and say yes I have a brother. I point to the image of Mother Mary in her room and say that I love her too.
She understands this and squeezes my hand affectionately.
Then she gives me fruits from her garden for my walk ahead and a flower for my hair.
She has only one request in return, that I take a picture of her horse before I leave,
her most prized possession. 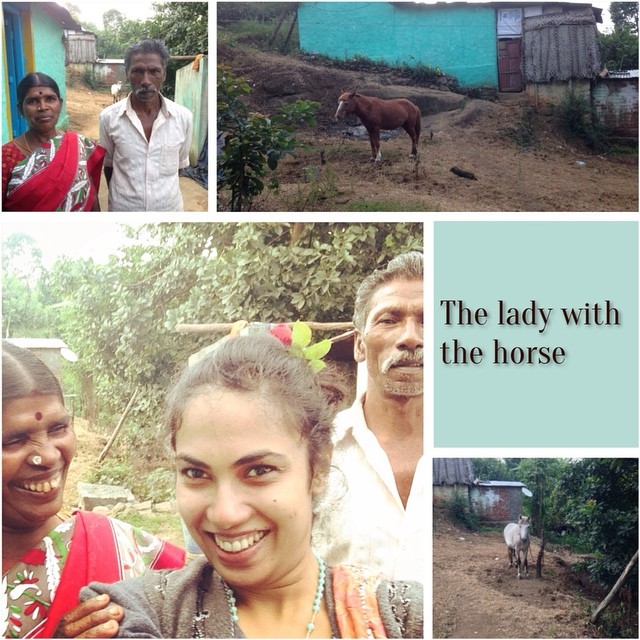 It was of little use to have big dreams in a place with little means to achieve them. It was futile, but Razia’s grandfather had told her otherwise and she believed him.
He was after all a very special man.

The women here are intelligent, ambitious, yet there isn’t a place for them to pour their energy nor exuberance. They are eager to learn that universal language that history and time had chosen, that language that stopped them from being a part of the modern world; English. Their own language of course is rich, the use of which could paint unimaginable poetry and imagery from the soul, but it was only of use to their own. The world would listen only to the voice it understood.
If you were a traveler passing by this village deep inside the desert in Rajasthan, you would smile at their lovely faces and modest clothing splashed with color. The eyes of the women, hiding their vast dreams in the boundless desert of their heart. You may take a photo with your phone, that the children will delight themselves for hours with, should you let them play a few games. You may see them and yet not see them, for if you stop to ask, you will find people eager to dream greatly, to learn, to dance, searching for possibility. One thing you will find undoubtedly here, as you would find anywhere in this world; is the hearts of the young women eager to love.

Every girl had a story, of the boy she adored from the same village or the next one, yet here you didn’t speak of these things openly, you told the other girls, but not the boy and never your own parents. They would chose suitably for you.
Razia was no different and yet she was. She had fallen terribly in love with a young man from the next village. A story doomed from the start, one to be silenced and held only as a great yearning in the heart. He was soon engaged to a woman in his own village and that was that!
Razia’s grandfather was a great mystic and a saint, a title he never bestowed upon himself, but one given to him by the people who so adored him. He himself, was always engaged in communion with God, but when people spoke to him, they found in his words meaningful answers to their questions and so they came from all over the village.
He asked them to reach out to God themselves, but when he had something of value to share, he happily did so. His words were always simple,
“Don’t go searching outside yourself asking this person to that one, about who you are. Believe in the pure open space in the desert. Sit here quietly praying and you will have your answers.”
“You must never seek revenge, If you do so, there will be noise and that will be all. If you have been wronged, seek no revenge and one day God will deliver the truth and it’s echoes will be heard by all.” He had asked Razia to have faith in this pure space in the desert where his body now lay buried. The granddaughter of the great mystic said a prayer. She told God of the great love she had for this young man and
Quietly in the open desert she let him go…

A year passed when her father brought to her door a wedding proposal.
Razia rubbed her eyes in utter disbelief to see her love standing before her. Her father had never known. For a reason unknown, the engagement had been called off and Razia’s father who travelled to the next village thought the young man would be a perfect match for his daughter. Faith paved her path. In the traditional Indian wedding, a few tears are shed when the girl parts with her family. Razia couldn’t help not caring for such tradition and no-one smiled and laughed greater than her. 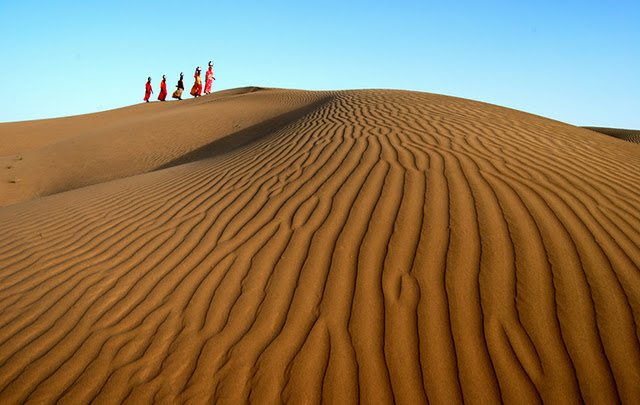 Dusk was soon handing herself to the dark and the three of us are standing on the rocks by the lake.
The lake which has a signboard outside saying, “Beware of crocodiles.”
The villagers say it is a hoax, so that the tourists will swim in a nearby beach whose shops can profit.
We ourselves had swum in the lake, the previous day in the sun’s company.

But right now is completely different.
The rocks casting dark shadows in the darkness that deepened every second, brought alive all our fears.
The crocodiles, whether or not they were hiding beneath those deep black waters, were alive in our imagination, lurking somewhere far beneath, waiting.
It is all so beautiful as long as we are standing outside, looking at the sweeping landscape begin to dream in the night, but we had come here to jump in.

Wasi heroically says something about swimming to a far off rock and back, but quickly changes his mind.
“So I’m going to have a smoke over it.”, says Tanzim as he sits down on a rock to light his cigarette.
We are all staring at the water when Wasi says, “Look there, the eyes staring out.”
“What? Where?”, we ask. It was his attempt to get us to completely change our minds. A cup floating in the water appears as the crocodiles snout and by now there is no way I’m jumping in either. There is not a soul far in sight but for the three of us and the crocodiles in our mind.

In one crazy moment, I ask my guardian Angel to protect me. Wasi runs and dives into the water first and I follow him. Pitch black bottomless darkness within.
We swim out in a matter of seconds.
Me and Tanzim jump in the second time, and the manner in which we jump back out, both throwing ourselves at Wasi, arms and legs beating the water madly, to get us out, is beyond hilarious.

We laugh hard as we ride into the stars and the rice fields, our bodies and hearts soaked in the lake’s sweetness, feeling more alive than ever.
Even if just for a few moments, we had dove into our fears to find they were silly voices in the head, that die the moment we embrace them. As I turn back to look, while the bike drifts through the road back home, fireflies ignite the path. 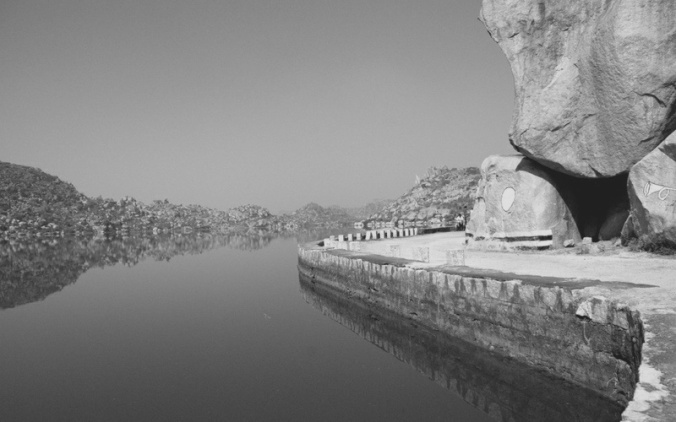 Happy court Anniversary Sahil & Tara. ❤ Happy friendship Anniversary to us Cyan. Here’s to more blurry imperfect photos, and unravelling meaning in our imperfect lives, to more poetry, mountains, oceans, wine, to the frothy embrace of the sea upon the rock and to serendipity, to more mischief, laughter, beauty and banter. To more creative courage and to love, with all its repercussions. . . To more questions, whose answers we don’t always necessarily have. ❤ . #serendipity
“Is this for real?”, I enquire after the sunset. A little boy laughs at my question. An old lady says, “Well this is nice. A good sunset can move the heart of all human beings.” We sit and watch in a long silent spell, as the sunset makes friends out of strangers. . . . . This is truly the year of surreal sunsets for me! #sunset #joy #nofilter